Archives of the Association for the Protection of the Adirondacks, 1901-1984.

The Archives of the Association include reports, letters, maps, conference proceedings and other records pertaining to every substantial issue which has confronted the Adirondack Park and the Forest Preserve since 1901, when the Association was formed.

Apperson's grass roots efforts to preserve the Forest Preserve and especially the Lake George region are the focus of this collection. Apperson, a GE employee, was an avid sportsman, entrepreneur and photographer who spent considerable time, money and energy championing his causes. The collection comprises app. 40 cu. feet and contains correspondence, pamphlets, litigation and photographs. It is currently in process and available for research in Jan 2015.

Schaefer, a protege of Apperson's was a political activist  fighting for the preservation of the Adirondack Forest Preserve and a builder of homes who utilized recyclable and reclaimed materials in his many of his works. His extensive collection of correspondence, litigation,published and unpublished pamphlets and brochures and film and photograph collections chronicle the efforts of conservationists striving to protect the integrity of the Wilderness. The 160 cu ft collection is in process but accessible to researchers.

The father of Bob Marshall, founder of the Wilderness Society, Louis Marshall was an active participant in the Constitutional Council, which defended the Forest Preserve as defined in Article XIV of New York State Law. Marshall, a victim of anti-Semitic sentiment when he attempted to join established clubs within the Park, founded the "Great Camp" of a small enclave of Jewish families called Knollwood. Marshall's earlier papers are in the American Jewish Library in Cleveland, Ohio; the collection contains correspondence, legal briefs  and photographs. Finding aid available.

Collected and donated by Louis C. Curth, the collection traces the history, organization, and activities of the New York State Forest Ranger Force from 1881 through the late twentieth century. The collection is partially processed.

Erwin Miller served as chairman of the ADK Conservation Committee's subcommittee on the Adirondack Protection Agency during the 1970's and 1980's. His records focus upon Unit Management Planning for state-owned lands, APA actions, and the actions of local government review boards on the APA.The collection is partially processed.

Verner was the Director of the Schenectady Museum and Planetarium and was a long term curator of the Adirondack Museum in Blue Mountain Lake. His papers span the years from 1962-1985 and include correspondence, pamphlets, ephemera, photographs and published works on a myriad of issues regarding the Adirondack Park. The collection is partially processed.

This collection consists of the correspondence and other papers of William James Stillman (1828-1901) as well as a number of photographic albums and records. After graduating from Union College in 1848, Stillman worked as an artist, diplomat, and historian, but is best known as a journalist and photographer who served for several decades as a correspondent for the London Times in the Balkans, Greece, and Italy. The several large photograph albums donated by the family contain Stillman’s photos of Greece, Italy, and the Adirondacks. 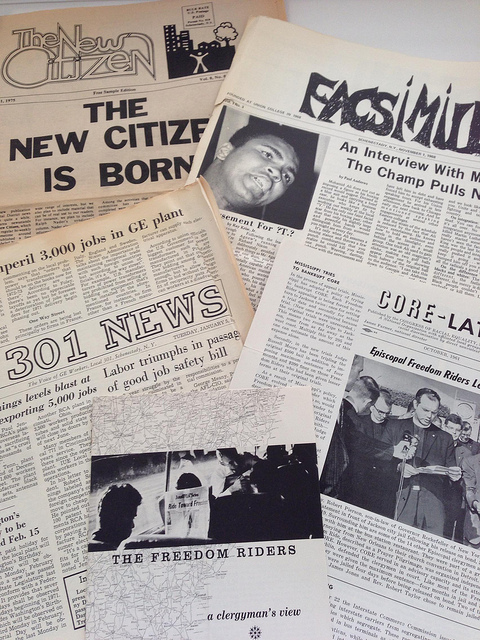